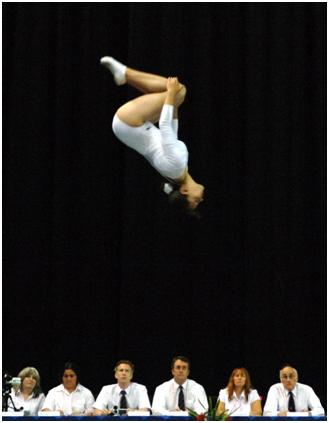 Following the rush to secure tickets for the London 2012 Games, the sport-loving public now have the chance to see world class gymnasts at the World Trampoline and Tumbling Championships at Birmingham’s NIA. The event, which is taking place from 17-20 November, will welcome around 650 athletes from over 40 countries, giving people the opportunity to see Olympic athletes ahead of the Games.

To qualify for places at the games, British gymnasts must either make the final (top eight) at the Worlds, where two places per individual class are available, or failing that go on to the Olympic Test event in January, where just one place is available per class. British Gymnastics, which is hosting the World Championships, has this week announced the eight gymnasts representing Great Britain and competing for their place in the British team:

The announcement of the line-up comes in the same week that the International Gymnastics Federation (FIG) published their latest World Rankings showing British Champion Katherine Driscoll as the current world number one woman, with Bryony Page (8th) and Emma Smith (10th) joining her in the top ten. British Champion Luke Strong (18th) and James Higgins (20th) are the top placed men.

“As we have progressed towards London 2012 we have been able to make some significant performance gains across the trampoline programme, with many of our athletes showing real podium potential. We are pleased to be able to name such a strong team for this event, which will give us the best chance of not only qualifying places for the London Olympic Games, but also showcasing our exceptional talent in front of the British public.”

Guy Dunstan, General Manager of the NIA and its sister venue the LG Arena, said:

“There’s a fantastic buzz across the country at the moment, with everyone getting ready for the world’s biggest sporting event. With 311 days until the Games begin, the World Trampoline and Tumbling Championships gives people the chance to see world-class athletes competing well ahead of the Games, for a fraction of the price of Olympics tickets.”

This is the first time that the World Trampoline and Tumbling Championships has taken place in the UK since 1967; encompassing eight events (four male/four female) held over a three-day period, as well as the World Age Group Championships (Junior competition). The event is taking place at the NIA, Birmingham, one of the UK’s premier sporting arenas, which has previously hosted events including the European Gymnastics Championships, the Aviva Grand Prix and World Indoor Athletics.

Tickets for the World Trampoline and Tumbling Championships are priced from £8 for adults and £4 for children, and are available from The Ticket Factory: www.theticketfactory.com or 0844 338 8000.

For more information on the NIA and the World Trampoline and Tumbling Championships, visit www.thenia.co.uk.