The London 2012 Olympic trampolining gold medals were won on 4th August by Rosannagh Maclennan from Canada and Dong Dong from China. 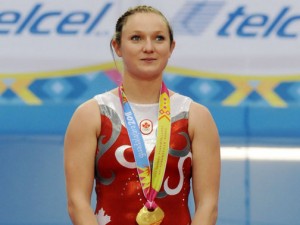 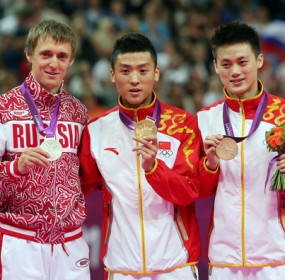 China was arguably the most successful country at trampolining taking Men’s Gold and Bronze, and Women’s bronze and silver medals.

Read on to find out how the competition unfolded.

In total 32 trampolinists took part – 16 male and 16 female. All trampolinists performed 2 routines in the qualification rounds. Half of the competitors (8 male and 8 female) then went through to the finals, where they perform just one routine.

16 women took part in the qualification round, with 8 progressing through to the final.

Below are details of each competitors qualification round score and their final score.

16 men took part in the qualification round, with 8 progressing through to the final.

Below are details of each competitors qualification round score and their final score.

Our ones to watch – how did they get on?

In our previous Olympic Trampolining article we picked out several ‘ones to watch’, so how did they get on?

The Canadian finished fourth overall, with a score of 55.860. She narrowly missed out on a bronze medal to He Wenna of China who scored 0.090 more than Karen. The gold medal was won by Karen’s pupil, training partner and friend Rosannagh Maclennan. When asked about the results Karen said;

“Fourth is the worst place to finish. But of course I’m happy for Rosie. So it’s mixed emotions. At the end, I for sure thought I was going to be fourth. And then the Chinese competitor fell. Then I thought for sure I was going to be third. Her routine was good, but it wasn’t that good. So when she fell I thought she’d be below my score. So it was like up, down, up, down, then the results came up and I was point-one out. Obviously, it’s a good day for Canada … to win a gold medal. But obviously I’m disappointed, too.’’

The 26 year old Brit finished in 9th place during the qualifying round, therefore missing out on a place in the finals. On hearing her score, Kat said; “No-one wants to finish ninth do they?” she said. “I did the best routines I could do but they just weren’t good enough today.” It was her first routine that pulled her score down, scoring just 46,335.

We love this lego version of Kat Driscoll at the Olympics

The strong trampolining team that performed so well in Beijing stole the show in London winning a men’s gold and bronze, and women’s silver and bronze. Dong Dong won gold medal this year, after taking Bronze in Beijing four years ago. Chunlong Lu took bronze this year after winning gold in Beijing.