Gardeners’ Question Time – What to plant under a trampoline? 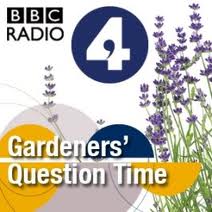 An interesting question was asked by Laura Burt from Summer Town, Oxford, on the Radio 4 Gardeners’ Question Time programme last Sunday.  The programme was broadcast from Oxfordshire as guests of the Royal Oxfordshire Horticultural Society.

With Eric Robson in the Chair, the panel members were Anne Swithinbank, Matthew Wilson and Pippa Greenwood.

Laura’s question to the team was:

“I am considering planting Sweet Woodruff under our garden trampoline. Do the team have any other suggestions?”  Eric then asked her why she wanted to plant something under the trampoline and she replied that it was dry shade and she did not want just a collection of weeds underneath it. 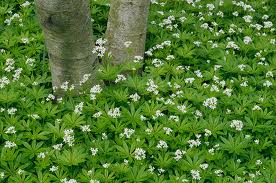 Sweet woodruff, as a suggestion of what to plant under a trampoline

Matthew Wilson, thought Laura’s idea a good one, Sweet Woodruff being a vigourous plant that would spread.  It was certainly not something you would plant in a border, unless you were feeling particularly brave.  Under a trampoline was certainly somewhere you might want a vigourous and invasive plant.  Jokingly, he also suggested Japaneze Knotweed, making reference to an earlier question in the programme.  Another suggestion he gave was Ground Elder, which again jokingly he suggested was Eric Robson’s favourite plant.  He agreed with Laura that planting something under the trampoline was a good idea and much better than an unpleasant weedy mess, as well as being much easier to look after. 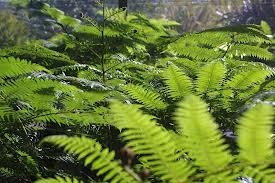 Fernery under an in-ground trampoline

Pippa Greenwood said it was amazing there was a question about trampolines.  She said she was a great believer in sinking a trampoline into the ground making it a ground level trampoline.   During a visit earlier in the day to Nicholsons (a well known Oxfordshire plant nursery), they had shown her their in-ground trampoline.  When they peeled back the trampoline spring padding, it revealed a natural magic world underneath, a wonderful fernery had developed.  Pippa said it was absolutely gorgeous as it had its own micro-climate.  Her suggestion was therefore to sink the trampoline to create a ground level trampoline and plant ferns under it.  This would not be ugly and would be positively gorgeous! 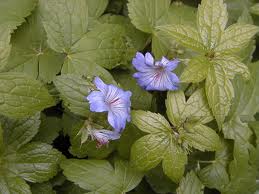 Anne Swithinbank said she would have been “lynched” if she has sunk her garden trampoline in to the ground.  She said her children liked to move it around the garden to get different views and to bounce under different trees, as they enjoyed that.  Her other ideas though, for what to plant under a trampoline, included creeping plants like Geranium Nodosum, which is a notoriously shade loving hardy geranium that spreads and travels.  Other suggestions included all the Lamiums, such as Lamium

Galeobdolon, with silvery flaked leaves and yellow flowers, right down to some quite dainty ones.

In an online article, Dawn Isaac, the garden designer, points out that anything planted under a trampoline must not be expected to grow too high.  She suggests Viola Purpurescens, a lovely, spreading plant with a pretty blue flower in spring. Or perhaps such plants as astrantia, lamium odorata and pulmonaria.  Also, she suggests, there are a couple of germanium species which take shade (I’m talking the cottage garden geraniums, not the pelargoniums here!) geranium pheum and geranium odoratum.

This gives you some ideas of what to plant under your garden trampoline whether you are leaving it above ground, so it can be moved about, or digging a hole so that it will be a ground level trampoline.